You are always welcome! 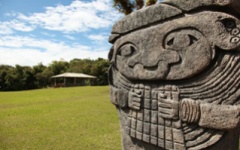 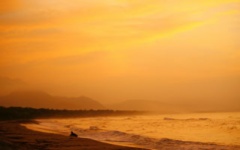 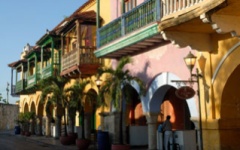 There is no definitive best time to visit Colombia other than rain or no rain. The climate is best described as equatorial or tropical with few climate variations throughout the year although certain parts of the country also feature their own microclimates such as humid jungles and freezing temperatures in mountainous regions. An important factor is the equator line and your proximity to it. The closer you are, the hotter more tropical the climate becomes.

A city at high altitude (8800 ft), Bogota keeps things cool all year round although it is best to head there during the driest spells from December through to March. Wet seasons occur in April & May followed by June & July.

You can expect a Caribbean climate with temperatures not deviating much from 28C all year round. It is most pleasant to be out and about in town in the evenings when there is a nice breeze flow through. The rain comes in October and November typically whilst it is driest between December to April.

Set on a beautiful stretch Caribbean coast, the temperatures found here are fairly constant all year round between 25-30C with variations dependant on altitude. The only thing to bear in mind is the rainy season which run May to June and September to November respectively.

This area is made up by a trio of towns: Pereira, Armenia and Manizales in the Quindio central region of Colombia which features lush coffee plantations spread around slopes ranging in height between 1300m and 1700m. The humid and temperate climate of the region lends itself perfectly to the cultivation of one of Colombia’s best known exports: coffee.

Cali comes to full swing in December and January during the Feria de Cali when the locals take to the streets to party and take part in parades.
Being around Villa de Leyva in December (7-9) is a special time of the year for the festival of the lights featuring superb firework displays.
February is Carnival time in all of South America and nowhere is this more evident in Colombia like in Barranquilla. Pereira holds a harvest festival in August throughout the city.

When to go to Colombia:

Undoubtedly the beating heart of the country, Bogata is an interesting place to spend a few days, wandering through the various districts and sampling a bit of modern Colombian life. Over the last decade or so the city has gone from a lawless and run down destination to one of the worlds’ emerging...

The interesting and lively town of Cartegena mesmerises and astounds in equal proportion and is simply one of “those” places that you will want to come back to time and time again. Part of the charm here is its combination of the Caribbean and South America along with some of the best preserved...

Tayrona National Park and the Coast

Just 34 Kms from Santa Marta on the Caribbean coast, Tayrona National Park consists of 12,000 land and 3,000 marine hectares of protected area with diverse flora of mangrove swamps, thorny scrubland, cloud forests, corals and algae prairies. The climate is humid and tropical with rainy months May...

Covering almost a third of the country, the foothills of the Amazon basin run eastwards from the high Andean peaks down towards the Japura River that slowly meanders into Brazil and connects up with the mighty Amazon River. While there are many other countries in South America that boast an...

A really interesting and beautiful region of the country, the coffee triangle (the Zona Cafetera) sits on the middle of the three “fingers” of the Andes, as they wend their way finally down to the Caribbean sea. Only a 45 minute flight (or around 6 hours down into the valley and back up again) from...

An hour’s flight to the south west of Bogota to the city of Nieva and then another 4 hour drive on from there is one of Colombia’s up and coming tourist destinations, San Agustin. Where once this area of the country was a risky prospect due to the cartels, it has now become one of the must see...

The collection of 10 or so small coral atolls that form the San Andres Archipelago are known as the West Indies department of Colombia and, at approximately 230kms from Nicaragua and 750kms from the Colombian coast, there has been a long running dispute between the two countries as to the true...